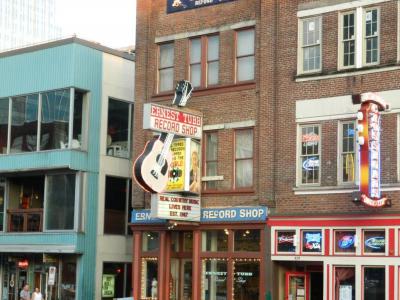 When Grand Ole Opry star, Ernest Tubb, aka the Texas Troubadour, had trouble buying and selling country music records, he took matters into his own hands by opening this famous record store in 1947. With its legendary spinning sign considered a Nashville landmark, it still stands today as a small but solid source of both classic and modern country/bluegrass recordings, as well as various DVDs, books, t-shirts, and souvenirs. At the back of the shop you can see a stage where many legends performed over the years after the Grand Ole Opry on Saturday nights, and where Tubb's radio program, Midnite Jamboree, was recorded and aired. In all, the place is great for browsing before/after hanging out and eating on Lower Broadway and remains one of the few nostalgic vestiges of "old country" in the area – worth adding to your Nashville itinerary!