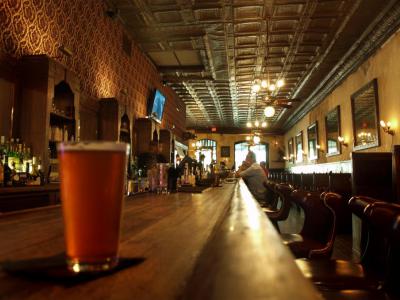 One of San Antonio’s most loved watering holes, the Esquire Tavern is the oldest riverfront bar on the famous River Walk. Established in 1933 – the day after Prohibition ended, it has been operational ever since, with a short hiatus from 2006 to 2011.

At the time of opening, The Esquire was considered an opulent addition to downtown San Antonio, with its high ceilings covered in pressed copper, terracotta floor tiles and elaborate woodwork. Thanks to its central location, the place drew clientele from all walks of life, and eventually became an obligatory stop for visitors to the Alamo City who looked to enjoy an inexpensive drink. Also added to its popularity a whole new decorative concept, featuring taxidermy and patterned tile.

The storied bar has a bit of a reputation, with legends of gun fights, illegal gambling, and even a ghost roaming in the basement. Dark, cool, and redolent with history, it invoked a feeling of danger as you went through the doors, but more like reliving a movie scene in a seedy joint full of characters than fearing for your life. Old regulars perched at the bar smoking, a uniformed man frisking people at the door and the occasional over-served patron being escorted out just added to the charm.

Years on, the Tavern continues to be the standard-bearer of bar excellence in San Antonio. It boasts the longest wooden bar top in Texas - over 100 feet of beer-soaked wood, rubbed smooth by the elbows of a zillion tipplers. In 1988, the bar top was spotlighted by “Ripley’s Believe it or Not” when, in a publicity stunt, it had 5,973 Lone Star bottles placed upon.

At the lower level, there is an intimate riverside lounge, called Downstairs at Esquire, which opens straight onto the River Walk and has a totally different concept, with a cool decor inspired by Victorian botanical and zoological collections.