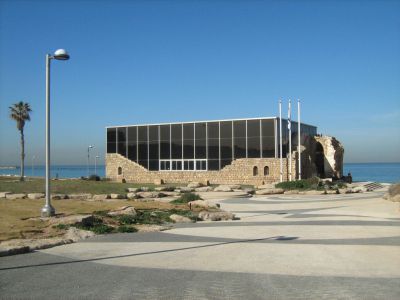 No tourist in Tel Aviv, interested in history, should fail to visit the Etzel Museum offering in-depth information on one of Israel's most prominent military organizations – Etzel. Renowned for its role in the country's struggle for independence alongside two other similar military groups – Lechi and Hagana, Etzel fought for the rights of Jewish settlers before the state of Israel and the Israeli Defense Forces (IDF) were established. It was a secretive organization that gained status as a part of the newly formed army of Israel in 1947.

At this museum, you can take a short but informative tour that will tell you all about Etzel's exploits, and particularly about its campaigns that helped liberate Jaffa. The building is well designed – made of glass, in a rectangular shape – and is constructed over the ruins of an Ottoman building.
Well organized exhibits and informative tour make the museum very popular among tourists visiting Tel Aviv. Etzel museum is located close to the Alma Beach, just off Charles Clore Park.
Image by Ori~ on Wikimedia under Creative Commons License.