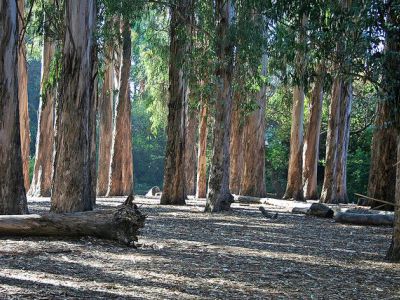 The University of California Berkeley campus has many notable sites and interesting places. One of the most unique is the eucalyptus grove that rests behind the Berkeley Art Museum and Pacific Film Archive.

The grove was planted in 1882 to create a windbreak for a running track that is no longer in place. The Tasmanian blue gums were chosen because they grow tall and strong with great speed.They also do not naturally provide food for any animals in the United States, which keeps their growth from being halted. In addition to this, disease causing insects rarely invade the eucalyptus tree. They stay healthy with very little upkeep.

Eucalyptus is not without controversy in California. The trees are an invasive species that have taken great swaths of native habitat. They are also highly flammable, which make them particularly dangerous in California. The medicinal smell that emanates from the trees is one that beloved by some and bemoaned by others.

Still, the uniqueness of the grove should not be missed. The Eucalyptus Grove at UC Berkeley is the tallest and densest grove of Tasmanian blue gums in the world. It is also the tallest stand of hardwood trees in the continent.
Image Courtesy of Flickr and John-Morgan.