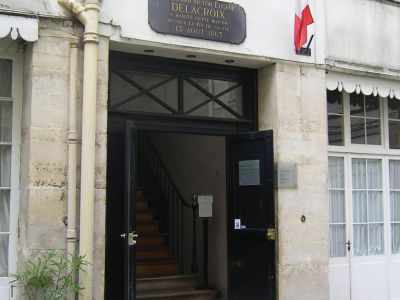 Housed in painter Eugène Delacroix’s former apartment, the Musée National Eugène-Delacroix is a unique and fascinating space, exhibiting the artist's original drawings and paintings, including his only three attempts at fresco from Valmont (1834); the "Education of the Virgin" painted in 1842; and "Magdalene in the Desert" exhibited at the 1845 Salon.

The painter had moved to this location on December 28, 1857, and remained until his death on August 13, 1863. About a hundred years later, the site became a national museum, although a rather small one – more of a multi-room exhibit containing Delacroix's memorabilia and works from nearly every phase of his career, but also quite a few paintings by other artists to illustrate his influence.

The rooms tend to have introductory comments in French and English but individual works are, for the most part, only described in French. One can also spend time in the small garden which, though modest, is very peaceful and pleasant – the perfect Parisian hideaway, the opposite of the city's vast collection of elite homes. Delacroix was no doubt easy enough to find, but what he had was a fine place to work.

Museum staff are available at 3pm to give a free, French-only, guided tour – no reservations required.