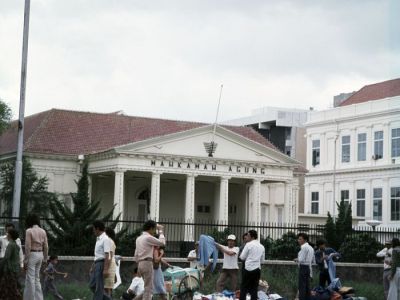 The Ex-Mahkamah Agung, which has witnessed some of the most important justice resolutions, has functioned as Supreme Court during Dutch colonization as well as after the proclamation of Indonesia’s Independence. Nowadays, the Supreme Court has moved in the Freedom Square, next to the National Monument. Still, visitors can enjoy the elegant silhouette of the Ex-Mahkamah Agung, with its white columns and stylish architecture featuring European elements. A visit inside the building is possible and it is free of charge. However, a written notice is required three days in advance.
Image by Tropenmuseum, part of the National Museum of World Cultures on Wikimedia under Creative Commons License.