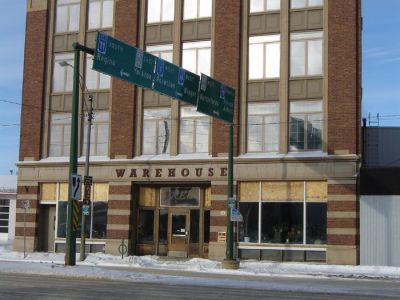 Canadian Fairbanks Company built the structure in 1911 as a warehouse for its large machinery and mill supply business. It was designed by David Brown and Hugh Vallance of Montreal. It was built with reinforced concrete, uncommon at that time. From 1948 until 1985 the Fairbanks-Morse Warehouse served as the home to the Co-operative Commonwealth Federation and as a union hall. The building had CPR spur line until the mid-1960s, when much of the downtown was redeveloped. It changed hands several times, serving as a warehouse, offices, photography studio and art gallery. Some tenants of note include AKA Gallery, The Photographers Gallery and Video Vérité (of which the latter two would merge to become PAVED Arts).
Image by Julia Adamson on Wikimedia under Creative Commons License.
Sight description based on wikipedia