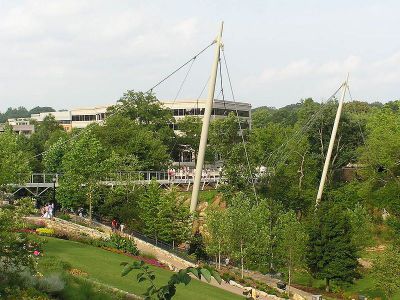 Falls Park on the Reedy is a 32-acre (130,000 m2) park adjacent to downtown Greenville, in the historic West End district. The park was founded in 1967 when the Carolina Foothills Garden Club reclaimed 26 acres (110,000 m2) of land that had been previously used for textile mills.

Renovation accelerated in the late 1990s, prompting the formation of the Falls Park Endowment, a private charity supporting ongoing development. Each summer the park is home to the Upstate Shakespeare Festival.

The park's most striking feature is a unique pedestrian bridge that curves around a waterfall on the Reedy River. Named the Liberty Bridge at Falls Park on the Reedy, the 355-foot (108 m) long suspension bridge is supported by cables on only one side, giving an unobstructed view of the falls. It was awarded the Arthur G. Hayden medal for innovative design in 2005.

The park also features a collection of public gardens and a wall from the original 1776 grist mill built on the site.

Want to visit this sight? Check out these Self-Guided Walking Tours in Greenville. Alternatively, you can download the mobile app "GPSmyCity: Walks in 1K+ Cities" from iTunes App Store or Google Play. The app turns your mobile device to a personal tour guide and it works offline, so no data plan is needed when traveling abroad.

Create Your Own Walk in Greenville

Creating your own self-guided walk in Greenville is easy and fun. Choose the city attractions that you want to see and a walk route map will be created just for you. You can even set your hotel as the start point of the walk.

Greenville boasts some very beautiful and unique landmarks that feature amazing architecture, monumental buildings, parks and picturesque places with waterfalls. Take this self-guided tour to visit the most remarkable attractions in Greenville.

There are many interesting religious buildings in the city of Greenville. You will see churches of different denominations; for example, there are orthodox temples and Catholic and Baptist churches. Take this self-guided tour to visit the most beautiful religious sites in Greenville.