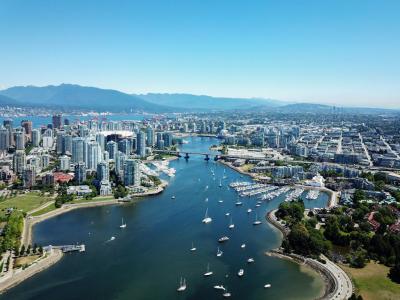 False Creek is a short inlet in the heart of Vancouver that separates downtown from the rest of the city. It was named so by George Henry Richards during his hydro-graphic survey of the coast in 1856-63. While traveling along the south side of the Burrard Inlet, Richards thought he was traversing a creek; upon discovering his error, he gave the waterway its current name.

Science World is located at its eastern end, with the Granville, Cambie, and the Burrard (which is furthest west) Street bridges crossing False Creek. The Canada Line rapid transit tunnel crosses underneath False Creek just west of the Cambie Bridge. The creek is one of the four major bodies of water bordering Vancouver along with English Bay, Burrard Inlet and the Fraser River. In 1986 it was the location of the Expo 86 World's Fair.

False Creek is a very popular boating area for many different activities, including dragon boating, canoeing, kayaking, public ferries, charter ships, and visiting pleasure boats. It has 10 marinas with berths for 1500 watercraft and several paddling clubs or boat rental facilities. Since 1986, the creek has been the venue for the Canadian International Dragon Boat Festival and other paddling events.
Image Courtesy of Wikimedia and Wpcpey.
Sight description based on Wikipedia.