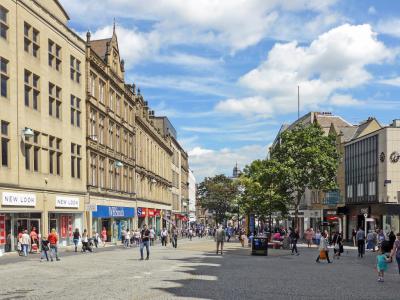 Fargate is a pedestrian precinct and shopping area in Sheffield, England. It runs between Barker's Pool and High Street opposite the cathedral. It was pedestrianized in 1973. Underneath all of Fargate there are mass medieval graves. Fargate also holds a Continental Market approximately 4 times a year, which includes European stalls selling cheeses, confectionery, clothing, plants and crafts including jewelery and ornaments. More recently, the street was home to Sheffield Assay Office. The corner at bottom end of Fargate (opposite the cathedral) is known locally as Coles Corner. It was a famous meeting point in the city, named after Cole Brothers who occupied the building. Originally The Albert Hall cinema which burnt down in 1937, it is now home to a modern building which currently houses HSBC, Starbucks Coffee, Vodafone and The Carphone Warehouse. but a plaque has been erected in memory of the Cole Brothers store.
Image by Wikityke on Wikimedia under Creative Commons License.
Sight description based on wikipedia