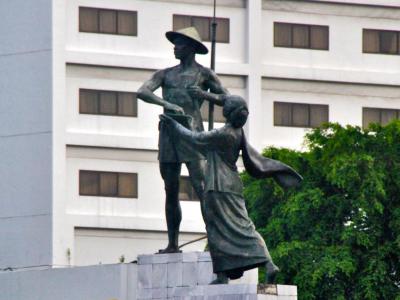 Located in the center of Jakarta, Farmer’s Statue is a splendid work of art as well as a motive of dispute among locals. The Tugu Tani, as it is commonly referred to, has been sculpted by two Russian sculptors, Otto and Matvei Manizer, and portrays an Indonesian farmer preparing to join the revolution, while his wife bids him goodbye, dragging him back for one more touch. The sculpture has been dedicated to all Indonesians who have fought for their freedom.

While some still regard the statue as a sign of homage to those who brought their Independence, the vast majority of population disregards both the message and the artistic value because of political matters. The statue was given to the Indonesian people by Russia in 1963, a period in which Russia was governed by the Communist Party and many of the Indonesian Parliament members shared the communist views. The statue can be observed in the traffic circle facing the Hyatt Aryaduta Hotel.
Image by frank wouters on Wikimedia under Creative Commons License.