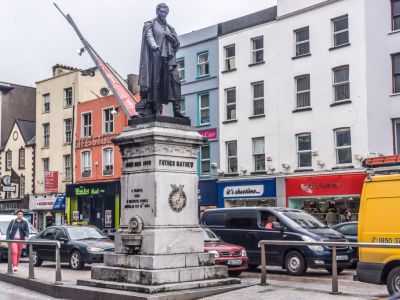 The Father Mathew Statue is located on a pedestal in St. Patrick's Street. It was unveiled on October 10, 1864. The statue was designed by sculptor John Hogan who sadly died before he could begin the work. It was then completed by John Foley and W. Atkins, who designed the pedestal.

The statue depicts Theobald Mathew, the Apostle of Temperance. He was a Capuchin priest who served most of his life in Cork. He died in 1856, after which the people of the city insisted upon a memorial in his honor. The pedestal reads "A Tribute From a Grateful People."

The statue sits in a median near a busy intersection. It is surrounded by shops, businesses and the heavily trafficked Lower Glanmire Road. A proposal was brought forth in 2000 to move the statue, but the people of Cork protested the move which allowed it to remain in the same spot it has occupied for more than 150 years.
Image Courtesy of Flickr and William Murphy.