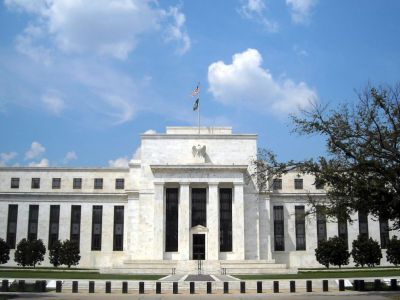 The stately edifice on the corner of 20th Street and Constitution Avenue NW in Washington D.C. has been the home of the Federal Reserve Board since October 20, 1937. Dedicated by President Franklin Delano Roosevelt, it stands to this day as an important contribution to American architectural history and design theory. Its architecture was quite daring for the time of the construction.

The architect, Paul Philippe Cret, who had studied art and design at the Ecole des Beaux-Arts in France, used a bold, very modernistic interpretation of classic Beaux-Arts styling to come up with a unique view of the Federal Building. He kept the classical Beaux-Arts style in the columns, while went in a totally new direction with regards to the building’s ornamentation to attain a very clean and elegant look. The pragmatic classicism style is found in the marble ornaments that decorate the doorways, as well as in the design of the Federal Eagle that adorns the fireplace in the board room.

Following an Act of Congress of 1982, the Federal Reserve Board building has been named after of one of its former chairmen, Marriner S. Eccles.
Image by AgnosticPreachersKid on Wikimedia under Creative Commons License.