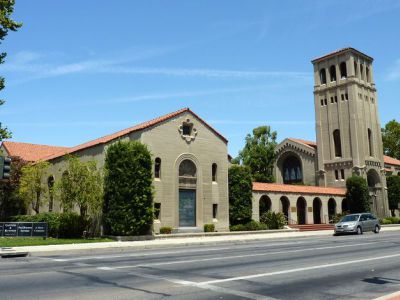 The First Baptist Church, also known as the Bell Towers, is a historic church complex presently used as an office building in Bakersfield, California. The structure was placed on the National Register of Historic Places on January 2, 1979.

Constructed in 1931, the structure was built of reinforced concrete, with the outside finish, simulating brick, created by a poured cast. Red, Spanish tile shingles cover the roof. A prominent, 70 foot (21 meter) bell tower stands in the center of the south facade, forming part of what was the vestibule and narthex of the church. The south side of the church also features large white oak doors with decorative arches above them. Blind arches and mullions rise to the roof level, giving the structure its Romaneque character. A single story arcade joins the wings of the building and surrounds a landscaped courtyard.

The southwest side of the complex is the original fellowship hall, built in a Mission Revival style. The structure is characterized by lofty arched windows on its west side; on its south side is a large arched window, originally a door, flanked by smaller arched windows.
Image by Bobak Ha'Eri on Wikimedia under Creative Commons License.
Sight description based on wikipedia