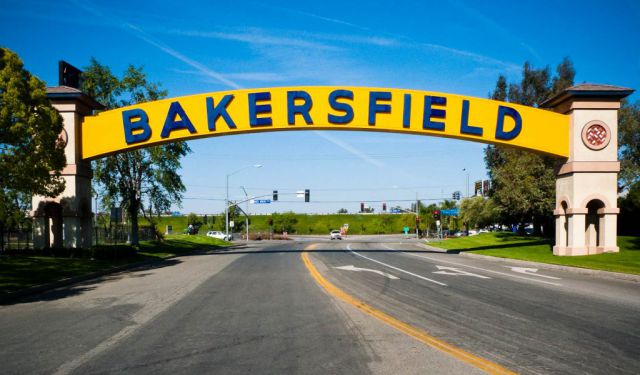 Colonel Thomas Baker established the city now known as Bakersfield in 1863. His small original settlement has developed into one of the largest cities in California. There are many notable landmarks in downtown Bakersfield that highlight the cultural and historic significance of the city. Take this self-guided tour to get acquainted with the beautiful monuments, parks, and cultural venues spread throughout Bakersfield.
Image Courtesy of Wikimedia and nickchapman.
How it works: Download the app "GPSmyCity: Walks in 1K+ Cities" from iTunes App Store or Google Play to your mobile phone or tablet. The app turns your mobile device into a personal tour guide and its built-in GPS navigation functions guide you from one tour stop to next. The app works offline, so no data plan is needed when traveling abroad.

In 1998, the facility was again modified. The parking lot, located east of the facility, was removed for the construction of the 10,000-seat sports arena. The combined complex was renamed the Centennial Garden and Convention Center. Incorporated in the design of the sports complex was a connection to the exhibit hall. This unique feature allows for the convention center to be used as a staging ground or warm-up facility for events being held in the arena. The entire complex was renamed seven years later, Theater and Convention Center.

Image Courtesy of Wikimedia and Bobak Ha'Eri.
Sight description based on Wikipedia.
2

Beale Memorial Library was established at the beginning of the 20th century. The building, furnishings, and a number of collections were donated to the city by the Beale family in memory of General Edward F. Beale. The original library building was ruined in the earthquake of 1952. Beale Memorial Library moved into the new, 130,000-square-foot building on Truxtun Avenue in 1988. It serves as Kern County's central research library and has about 300,000 items, including a huge local history and genealogy collection.
Image Courtesy of Flickr and Barbara Butler- FireCreek Photography.
3

Along the outer path of the memorial are nine flags. They are: United States of America, State of California, Army, Navy, Air Force, Marines, Coast Guard, Merchant Marines, and POW/MIA. In between the flag poles will be the wall of valor. It list the names of those people who were killed or missing in action during wartime. The names are etched in glass panels, and painted in gold for visibility.
Image Courtesy of Flickr and Andy Castro.
Sight description based on Wikipedia.
4

Central Park at Mill Creek is bounded by 21st, 19th and R Streets. The Bakersfield Museum of Art and the Bakersfield Community House are adjacent to the park. The park was originally established in 1937 along the Kern Island Canal. Local authorities decided to redevelop the park in 2009, and Meyer Civil Engineering has spearheaded this project. The park currently occupies 1.5 acres and features the New Mill Creek covered bridge, concrete walkways, and fountains. Construction continues, however, and there are further plans to transform the canal into a lake and build more facilities. Even with the building going on, the park is a fun place to visit.
Image Courtesy of Flickr and Keisha Gaines.
5

The Bakersfield Museum of Art is an art museum, in Bakersfield, California. It is located in Central Park. It has four galleries, which contains a permanent collection mainly from regional artists, as well as room for traveling art exhibits. In 1991, it was accredited by the American Association of Museums.

The Bakersfield Museum of Art is 17,400 square feet (1,620 m2). It contains two classrooms and a banquet hall. Outside, the museum has several gardens which display various sculptures and other art forms. The museum’s permanent collection is primarily from regional artists. The museums mission is to: " a broad spectrum of visual arts experiences through the exhibition and preservation of fine art, educational programs, community outreach, and special events."

The Kress Building is situated in downtown Bakersfield, facing 19th Street and K Street. It was built in 1931 out of reinforced steel and brick. The designer of this splendid Art Deco building was American architect Edward Sibbert. It originally housed the Kress Department Store but now serves as an office building.
Image Courtesy of Flickr and Don Barrett.
7

The Buena Vista Museum of Natural History is a natural history museum in Bakersfield, California. It is located in the Arts district, downtown. The museum focuses on three areas: Geology, Anthropology, and Paleontology.

The centerpiece of the museum is the Mary Ernst Collection of Miocene fossils from Shark Tooth Hill. Other exhibits include: collection of taxidermy animals from Africa, replica of a triceratops skull, replica of a yokuts Indian village, and a model of Yosemite Valley complete with roads, buildings, and trails.
Image Courtesy of Flickr and Herb Dunn.
Sight description based on Wikipedia.
8

Today, the Fox Theater is the heart of Downtown Bakersfield's arts and entertainment district. The theater is home to FLICS, Bakersfield's foreign film program which runs fall through spring yearly, showcasing the best foreign film of the past year. The Fox Theater also sees a variety of music stars including Cyndi Lauper, Olivia Newton John, and Switchfoot. The Theater also hosts numerous local dance recitals, as well as performing arts events such as Russian ballet.
Image Courtesy of Wikimedia and Bobak Ha'Eri.
Sight description based on Wikipedia.
9

The Bakersfield Californian Building consists of two structures, both faced with reddish-brown bricks and with a primary facade facing east. Originally, the four-story main building was rectangular in shape, but over time additions made it L-shaped. A detached, 900 square feet (84 m2) rectangular structure, designed as a women's rest facility, is located at the northeast corner of the larger one. Exterior brick pilasters on the secondary sides cover the structural steel. The main entry on the eastern facade consists of seven wide granite steps which lead to polished brass double glass doors. The entry is divided into three sections by columns, each features a large, rectangular opening. The two side sections hold large, multipaned windows and heraldic shields above, one with the name of the architect. The center section, framed by Corinthian columns includes the main door along with a multipaned transom. The parapet above the sections is inscribed with "The Bakersfield Californian"; a later renovation placed a new inscription, using a new font, in front of the original inscription.
Image Courtesy of Wikimedia and Bobak Ha'Eri.
Sight description based on Wikipedia.
10

The Colonel Thomas Baker Statue can be found at the entrance to Bakersfield City Hall at 1501 Truxtun Avenue. This historical landmark was created in 1944. It depicts a man seated, holding a document. The statue is dedicated to Colonel Thomas Baker, a noted intellectual, adventurer, and pioneer who served as an officer in the Revolutionary War. He first settled the area around 1863, and Bakersfield is named in his honor.
Image Courtesy of Wikimedia and Skyman9999.