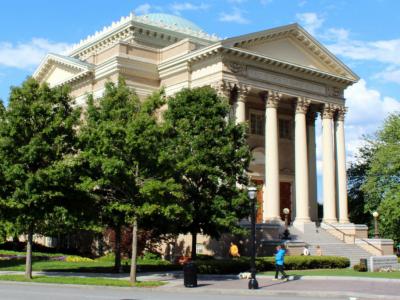 First Church of Christ, Scientist is the main congregation for Atlanta's Christian Science community, whose service is very different from other Christian services. Those not familiar with the Scientist belief system should note that it originated in 19th-century New England with Mary Baker Eddy, who argued in her 1875 book "Science and Health" that prayer can heal the sick. The book became Christian Science's central text, along with the Bible, and by 2001 had sold over 9 million copies.

Opened in 1914, the church's historic Greek revival edifice is located on the corner of Fifteenth Street, N.E., and Peachtree Street in the city's Midtown section and is a contributing property in the Ansley Park Historic District. Aside for the architectural importance, it claims to be the first air-conditioned building in Atlanta, having used a primitive system of involving fans blowing over blocks of ice placed in the passages beneath the floor of the main auditorium.