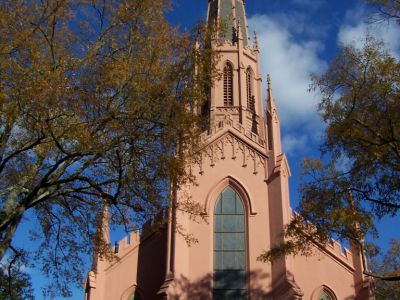 The 1813 building still exists, and is now known as Jackson Hall. A new, larger English Gothic structure was built in 1854. Though spared the torch during Sherman's march to the sea, the building's original 180-foot spire was destroyed in an 1875 hurricane, and rebuilt in 1888. The spire was again damaged in a 1910 fire, and rebuilt to be eight feet taller. A remodeling in 1925 increased the capacity of the building to 1,250 from 800, increasing the length of the building by 40 feet. At the same time, classrooms were built at the sides, a choir loft added in the rear, and the organ loft rebuilt.
Image Courtesy of Wikimedia and Abductive.
Sight description based on Wikipedia.