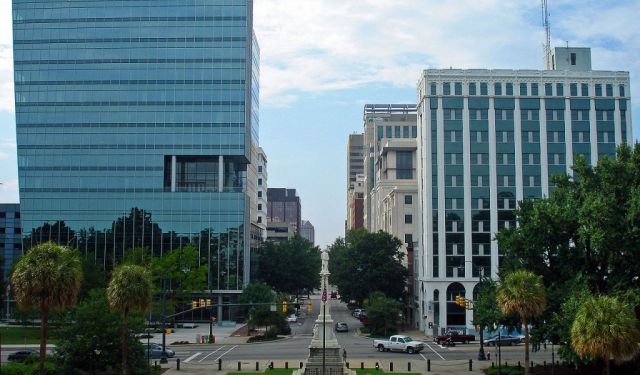 Columbia is a beautiful city, the largest one in South Carolina, with a great history and beautiful landmarks. It has a large number of old houses that are now museums and that represent a whole part of the history. All these houses have been named after famous personalities and families from years ago. Take this tour and discover the beauty of downtown attractions.
How it works: Download the app "GPSmyCity: Walks in 1K+ Cities" from iTunes App Store or Google Play to your mobile phone or tablet. The app turns your mobile device into a personal tour guide and its built-in GPS navigation functions guide you from one tour stop to next. The app works offline, so no data plan is needed when traveling abroad.

The State House is in the Greek Revival style; it is approximately 180 feet (55 m) tall, 300 feet (91 m) long, 100 feet (30 m) wide. It has 130,673 square feet (12,140 m2) of space. The South Carolina State House was designed first by architect P. H. Hammarskold. Construction began in 1851, but the original architect was dismissed for fraud and dereliction of duty. Soon thereafter, the structure was largely dismantled because of defective materials and workmanship. John Niernsee redesigned the structure and work began on it in 1855, slowed during the Civil War, and was suspended in 1865 as Sherman's Union Army entered Columbia on February 17. Although several public buildings were "put to the torch" when United States troops entered the city, the capitol building was not.

Image by Badbadb on Wikimedia under Creative Commons License.
Sight description based on wikipedia
2

Image by Jack E. Boucher on Wikimedia under Creative Commons License.
Sight description based on wikipedia
3

3) University of South Carolina (must see)

The University of South Carolina (also referred to as USC, SC, South Carolina, or simply Carolina) is a public, co-educational research university in Columbia. Its campus covers over 359 acres (145 ha) in downtown Columbia not far from the South Carolina State House. The U-shape quadrangle of eleven buildings open to Sumter Street, became known as the Horseshoe. During the 20th century the campus began to spread out dramatically from the Horseshoe. Today it includes the student union, 24 residence halls, numerous academic buildings, Longstreet Theatre, the Koger Center for the Arts, the Carolina Coliseum, the Colonial Life Arena, Carolina Stadium, and various facilities for Olympic sports. The University is categorized by the Carnegie Foundation for the Advancement of Teaching as having "highest research activity.

The College of Art and Science of University of South Carolina houses the McKissick Museum. It exposes natural sciences, history and art materials related to mineral collections - different types of minerals, silver from the 18th century, gemstones and other types of stones that were found in the southwest part of the USA.
Image by Dfscgt21 on Wikimedia under Creative Commons License.
Sight description based on wikipedia
4

The 1813 building still exists, and is now known as Jackson Hall. A new, larger English Gothic structure was built in 1854. Though spared the torch during Sherman's march to the sea, the building's original 180-foot spire was destroyed in an 1875 hurricane, and rebuilt in 1888. The spire was again damaged in a 1910 fire, and rebuilt to be eight feet taller. A remodeling in 1925 increased the capacity of the building to 1,250 from 800, increasing the length of the building by 40 feet. At the same time, classrooms were built at the sides, a choir loft added in the rear, and the organ loft rebuilt.
Image by Abductive on Wikimedia under Creative Commons License.
Sight description based on wikipedia
5

The Woodrow Wilson Family Home is a home that dates back to the Victorian era. It was the house of the 28th President of the United States. It was the house of his parents, Dr. Joseph Ruggles Wilson and his wife Jeannie Woodrow Wilson. It houses pieces of art, furniture, pictures and other elements that date from the 1850s and 1870s. The surrounding land around the house was divided into a back garden used for growing fruits and vegetables and a front yard for flowers. The design of the garden was established by Jeannie Woodrow Wilson.
Image by kwatson0013 on Flickr under Creative Commons License.
6

7) Hampton-Preston Mansion and Gardens (must see)

Hampton-Preston Mansion and Gardens is another old house that was used by two important families in the town for 150 years. These two families Hampton-Preston were occupied with plantations. In the period of Wade Hampton I, the house style was changed from Federal to Greek Revival style. The Preston family moved in after the death of Hampton and his daughter married a Preston who enlarged the house. The house is surrounded by a beautiful 4-acre garden known and admired in the region. Now it is a museum that exhibits photos of how the house was over the years with all its changes, different objects, photos and pieces of furniture that belonged to the two families.

8) Columbia Museum of Art (must see)

Memorial Park is a 4-acre (16,000 m2) tract of land in the Congaree Vista between Main Street and the river. The park was dedicated in November 1986 along with the unveiling of the South Carolina Vietnam Monument. In June 2000, the Korean War Memorial was dedicated at Memorial Park. In November 2014, Columbia native and resident of Boston, Henry Crede, gave a bronze statue and plaza in the park dedicated to his WWII comrades who served in the Navy from South Carolina. Therewithal to the monument, this park has a water fountain, mature shade trees, grassy areas, walkways, stairs, even a creek with a small bridge. It sounds like a very peaceful place and you could definitely see why Veterans and others might be drawn to this beautiful space.
Image by Akhenaton06 on Wikimedia under Creative Commons License.
Sight description based on wikipedia
10