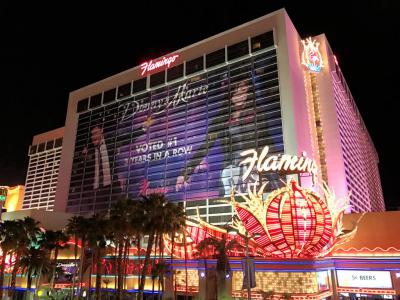 Flamingo Las Vegas (formerly The Fabulous Flamingo and Flamingo Hilton Las Vegas) is the brainchild of the mobster-entrepreneur Bugsy Siegel who had the idea that a resort-style casino out on the road to Los Angeles would attract a higher-class clientele than the Western-themed hotels in downtown Vegas. In late 1945, he and his partners came to Las Vegas piqued by its legalized gambling and off-track betting.

Siegel began by purchasing El Cortez on Fremont Street but his expansion plans were hampered by unfriendly city officials aware of his criminal background, so he began looking for a site outside the city limits. Hearing that Wilkerson was seeking extra funding, Siegel and his partners posed as businessmen and directly bought a two-thirds stake in the project.

Siegel took over the final phases of the construction and convinced more of his underworld associates, such as Meyer Lansky, to invest in the project. Having lavished a great deal of mob's money into it, he reportedly lost patience with the rising costs and reportedly once mentioned to his builder, Del Webb, that he had personally killed 16 men. When Webb appeared scared upon hearing that, Siegel reassured him, "Don't worry – we only kill each other."

Siegel had also built a secret ladder in the "Presidential Suite" to escape, if necessary. The ladder led down to an underground garage where a chauffeured limo was always waiting. Sadly, Bugsy Siegel’s masterpiece didn't save him from getting shot himself in the head after mob bosses, convinced that he was involved in skimming from the investment, ordered him whacked.

The architectural theme of the property is reminiscent of the Art Deco and Streamline Moderne style of Miami and South Beach. Staying true to its theme and name, the hotel includes a garden courtyard which serves as a wildlife habitat for flamingos. The hotel opened in 1946, flopped, re-opened and became a success. The Flamingo is the oldest resort on the Strip still in operation and the last remaining local casino opened before the 1950s that is still in business.

There is a memorial to Bugsy Siegel on the ground of the hotel, next to the Wedding Chapel.
Image Courtesy of Wikimedia and LasVegasGuy.
Sight description based on Wikipedia.