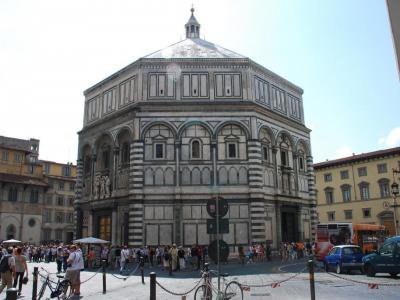 The elaborate Battistero di San Giovanni (named for Saint John the Baptist, patron saint of the commune of Florence) is located in Piazza del Duomo and Piazza di San Giovanni, diagonally opposite the Duomo cathedral. Built in the 7th century over a Roman structure, believed to a temple dedicated to Mars, it has an octagon shape (common for baptisteries for many centuries since early Christian times), the number eight a symbol of regeneration in Christianity, signifying the six days of creation, the day of rest, and a day of re-creation through the sacrament of baptism.

The baptistery was decorated with white and dark green marble (in a zebra-like pattern) during its reconstruction in 1059 but is more known for its three sets of bronze doors. Designed by Andrea Pisano, the south doors portray scenes from the life of St. John and beautifully depict in bronze the eight virtues of Christianity. The doors on the north side took Lorenzo Ghiberti 21 years to complete and portray the life of Christ. He was then commissioned for the east door and worked on it for 27 more years. Dubbed by Michelangelo as the ‘Gates of Paradise’, the ten panels on the door depict “the Story of Joseph”.

Inside, you may see some magnificent mosaics covering the ceiling, and a baptismal font in place since 1576 for the baptism of the son of Francesco I de' Medici, ruler of the city. Aside from members of the Medici family, the structure is witness to the baptisms of many Renaissance-era personalities and almost all Catholic Florentines until the 19th century. Visiting this architectural beauty is, therefore, visiting the Catholic history of Florence.

***DANTE'S FLORENCE TOUR***
Dante was born to Alighiero di Bellincione d'Alighiero and his first wife, named Gabriella degli Abati, who was from a family of wealthy landowners. Their eldest son was born in May 1265 and was initially called Durante ("enduring") after his mother's father; however, his parents eventually chose to christen him Dante, a shortened form of the name. Evidence for his birthday near the end of May is from the poet's own testimony, in Canto 22 of the "Paradiso", where he addresses the sign of Gemini, suggesting that all of his intellectual and literary attributes have their source in the influence of the constellation of his nativity. He also mentions the baptistery affectionately in another passage.

Tip:
Admission to the Baptistery is included with your standard ticket that covers the Duomo sights excluding the cathedral (which itself is free) within a 72-hour period.
A dress code is required; no shorts or sleeveless tops allowed. Knees and shoulders must be covered for both men and women.
To attend the daily mass, be there at around 10:30 at the door opposite of the main one and say "mass" or "messa" to the man on the door.