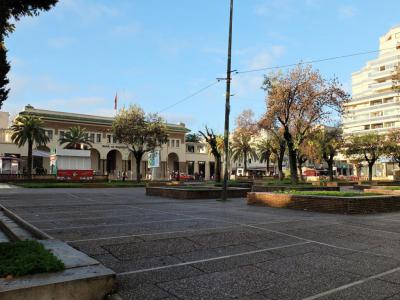 The new town of Fes, established by the French colonial administration in 1912, was planned around the Avenue Hassan II. At this time Avenue Hassan II briefly underwent a sea change and became Avenue de France. Later it changed back. A parkway runs between the traffic lanes. At the north end is the Place de la Resistance roundabout and fountain.

Going south on the avenue one encounters Florence Plaza (formerly Place Lyautey). The Florence Plaza is a broad tree-planted plaza. Buildings in the area show a mix of neo-Moorish, Art Deco and Neoclassical styles. On the south side of Florence Plaza is the Bank al-Maghrib, built in 1931 by architect Rene Canu.

On the east side, on Avenue Hassan II, is the Central Post Office building. The first post office was built in 1927 by architect Edmond Pauty. It was enlarged in 1947 by Emile Toulon. The Court of Appeals building, just south of the post office, was constructed in 1936.

The designers of the square were inspired by the form of the Baptistry of San Giovanni in Florence, Italy.
Image Courtesy of Wikimedia and Robert Prazeres.