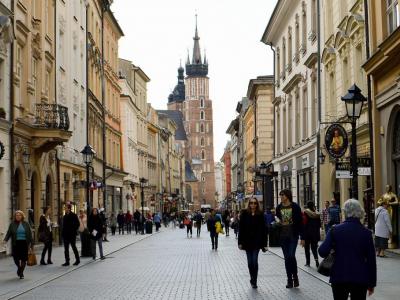 There's nothing like strolling the streets of a city to feel its pulse, and if you want to put your finger on Krakow's then take a walk down Florianska Street. This place gets its name from the famous Florian Gate at the north. Built in the 13th century, the street has managed to garner attention since its inception. Filled with structures that boast of beautiful facades, the Florianska Street is the best place to admire the change in styles of architecture of the buildings through the years.

While some buildings still brag of a stern yet intricate edifice displaying Gothic influence, other buildings showcase styles more modern ranging from early to late Renaissance to Baroque and Neoclassic. Nevertheless, the amalgamation of these different styles makes the street worthy of mention and visit.

Not only it is a must-see because of its rich architectural wealth, but each structure (that is given a serial number) also has a story of its own. There are even a few house museums you might want to enter for a short visit. Owned by some of the wealthier middle-class families in the earlier centuries, one can learn about each home and its inhabitants in detail.

Today, the Florianska Street is the most visited street in Krakow and rightly so, for it has so many stories to offer to its visitors.

Tip:
Be aware of the money exchange outlets located here – to be avoided or it will cost you.
Image Courtesy of Wikimedia and Francisco Anzola.