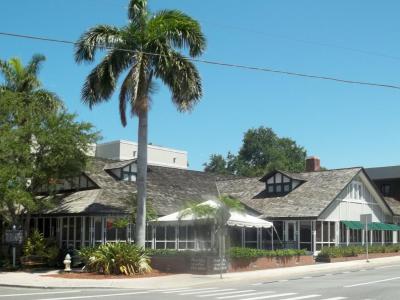 Florida Studio Theater or FST was initially the clubhouse of The Women's Club of Sarasota. It was opened in 1915 and is part of a small group of Sarasota Tudor structures. In '79 the club moved out of the building which then housed the Florida Studio Theater. The building is in the traditional Mediterranean Revival style. It is a non-profit theater that produces contemporary plays, with 25,000 subscribers a year, more than any theatre its size in the country. It has been in operation since 1973 and currently serves over 160,000 attendees per year. Its major programs include the Mainstage Series, the Cabaret Series, Stage III, New Play Development, and WRITE A PLAY. The FST campus is a village of theatres and performances spaces. These spaces include the historic Keating and Gompertz Theatres, the Parisian-style Goldstein Cabaret, the John C. Court Cabaret and The Green Room café and bar. FST’s education program offers over 20 classes weekly for both children and adults. Classes are offered each week in theatre, dance and music. FST also provides community outreach programs for the financially disadvantaged, physically and mentally challenged youth and nursing home residents. Florida Studio Theatre provides a Children and Adult Scholarship Program for about 15 percent of all participants with full or partial tuition waivers. The 2012-2013 classes include Play Reading Club, Playwriting Workshop, Sketch Comedy, Adult Acting, Acting for the Camera, Spoken Word and Improvisation. The Florida Studio Theatre Cabaret series opened in 1996 and now houses both musical and improvisation performances. The program focuses on celebrating the lyric poets of our time, as well as presenting social and political satire. The Cabaret caters to the creation of new work and has produced 40 world premieres.
Image Courtesy of Wikimedia and Kander Hopkins (FST).
Sight description based on Wikipedia.