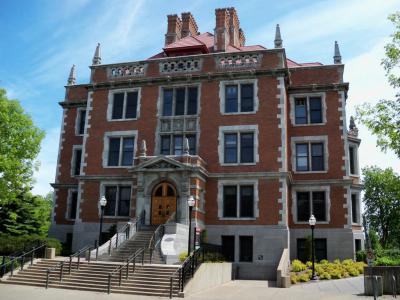 Designed in the Jacobethan Revival style by Minnesota State Architect Clarence H. Johnston, it was built to house departments displaced after the burning of Old Main in 1904. These included the Pedagogy, Oratory, and Psychology departments, as well as the Alumni Magazine, German Museum, Gopher Yearbook, and Minnesota Daily. It is now home to a majority of the university's foreign language departments.

The building, which received an extensive rehabilitation in 2012, is considered one of the most elaborate on campus. Its exterior features carved brick detailing, balustrades, parapets, gargoyles, and many chimneys. Interior features include polished marble hallways, fireplaces, and ornate staircases.

Folwell Hall is named in honor of William Watts Folwell, the first president of the University of Minnesota.
Image Courtesy of Wikimedia and AlexiusHoratius.
Sight description based on Wikipedia.