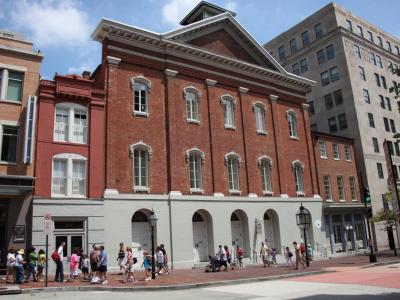 Ford’s Theatre is where President Abraham Lincoln was shot while viewing a theatrical performance on April 14, 1865. However, this building did not start out as a theatre. It was built in 1833 to house the First Baptist Church of Washington. The church used the building until 1861 when they moved to a new building. John Ford bought the building and with renovations, turned it into a theater. The building was destroyed by fire in 1862 and soon rebuilt.

The newly built Ford’s Theater opened in August of 1863. It was huge and had seating for over 2,000 theater patrons. On that fateful April day, President Lincoln, his wife and a group of friends, went to the theater to see Our American Cousin. The country was still feeling the keen sting of the Civil War; in fact, General Lee had surrendered less that one week before. John Wilkes Booth, feeling anger at the loss of the Confederacy, entered the Presidential box and shot the President in the head. President Lincoln died the next day at a home across the street from the theater, the Petersen House.

In the 1940s there was recognition that a very valuable historical legacy was being lost. It was not until 1955 that Congress passed a bill that the theater could be restored. In 1968, Ford’s Theater was once again opened as a theater. Today both the theater and the Petersen House are preserved together as a National Historic Site at 511 10th Street, NW in Washington, D.C.

Tip:
Sit in the back of the theater; that way, when they open the door to the Peterson House across the street you can be one of the first in line.
Both the Peterson House and Ford's Theater have gift shops, with the former perhaps a better shop than the latter.