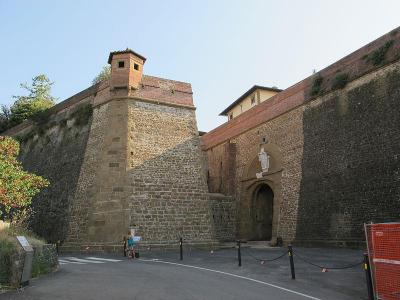 A perfect sample of both Italian Renaissance and military architecture, Fort Belvedere was built at the end of the 16th century by Grand Duke Ferdinando I de' Medici to protect the city of Florence and to demonstrate the power and prestige of the Medici Family. In addition, it was used to hold the Medici's treasury, as well as to provide emergency shelter for the Grand Duke himself, should the city ever come under attack. For that purpose, the fort was connected to Palazzo Vecchio via corridor over the Ponte Vecchio, plus there were other passages connecting it to the Pitti Palace and Boboli Gardens.

From a military standpoint, the fortress – largest in Florence – occupies a strategic vantage point over the city and surrounding area. Due to the nature of the Renaissance-time warfare, forts were paramount to the defense strategy and Belvedere served this purpose all too well as a citadel and garrison for troops for over 100 years after its completion. Its walls are purposely placed at angles to each other so as to allow good observation of and, if necessary, crossfire to defend the neighboring walls. Galileo Galilei, in turn, used it for astronomical observations and, after being sentenced to life imprisonment in 1633, used to live nearby at Villa Arcetri.

After five years of renovation to improve safety, the fort was reopened to visitors in July 2013, now serving primarily as an exhibition center. A small entry fee to the place is worth every penny of it and you can walk around the site freely, enjoying a beautiful panorama of Florence and the surrounding hills.

***MEDICI LANDMARK***
The opulent villa at the center of the fortress, Palazzina di Belvedere, predates the fort and was designed circa 1570. As the fort's secondary purpose was to house the Grand Duke in times of unrest or epidemic, it was built as a comfortable, luxurious palace. Not adhering to military purposes, it housed the Medici family's treasures at the bottom of a well that was well-protected by traps. Any intruders attempting to force open the lock would set off the lethal trap and survival was most unlikely!

Tip:
On the upper floor of the Fort, there is a nice cafeteria where you can have a decent meal or a cold drink.