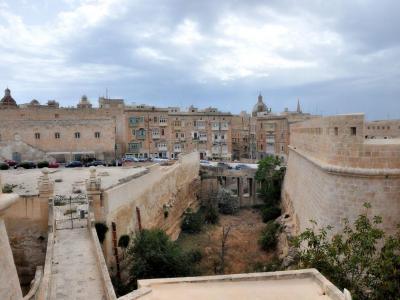 One of the most prominent and iconic features on the island of Malta is the star-shaped Fort Saint Elmo. It's located on the far end of Republic Street, standing proud at the entrance to the Grand Harbour to the south and the Marsamxett Harbour to the north.

Each of the three points of land guarding the entrances to the two inner harbors has fortifications. Fort Saint Elmo sits on the Sciberras Peninsula between the two harbors.

The fort's location has been used since the first local militias set up watchtowers here in the 1400s. After the Turkish fleet sailed into Marsamxett Harbour unopposed in 1551, it was decided that more fortifications were necessary. So the simple watchtower was expanded into a star fort designed by Spanish engineer Pietro Pardo.

The fort was the scene of intense fighting during the Great Siege of Malta in 1565. The fort was held for 28 days but was eventually taken by the Ottomans. However, the extended siege of the fort gave the rest of the island vital time to prepare themselves.

Over the centuries that followed, the fort was upgraded and expanded in various ways.

Of particular interest to visitors of the fort is the National War Museum. It's located in the Old Drill Hall of Lower Saint Elmo. Initially, the museum's collection focused on the two World Wars, but since it was refurbished in 2015, the collection now spans from the Bronze Age to today. While the story that the museum tells has been expanded, the most prominent pieces of the collection are from World War II.

Fort Saint Elmo is one of the most impressive fortifications on the island to tour. It's a wonderful place to visit for the history of the place, or simply to take in some stunning views of the Mediterranean Sea and Maltese coastline.

The museum collection contains a few pieces worth taking a moment to see. From Malta's early conflicts, there is Ottoman armor and the armor of the Order of St. John. From World War II, you can view a Gloster Sea Gladiator aircraft from the Hal Far Fighter Flight. There's also the Jeep used by American Presidents Dwight D. Eisenhower and Franklin D. Roosevelt.

When touring the fort, the views are spectacular. But it does require quite a bit of time outside. So if the weather is less than ideal, remember to bring appropriate clothing. The winds in the winter can be brutal!