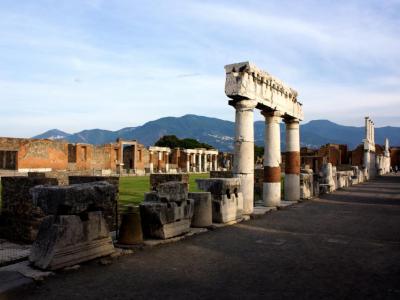 The Forum, a feature present in many Roman settlements, was a public space found at the centre of Pompei. It stands in the middle of a square, which contains several of the town’s most significant buildings. From the southern end of the forum, moving clockwise, there are the Basilica, the Temple of Apollo, the grain and food markets, the sanctuary, the temple of Vespasian, the building of Eumachia, and the Comitium.

It is safe to assume that the Forum was at one time the centre of Pompei. It stands on the junction of two Roman roads, linking Pompei with Naples and the nearby settlement of Stabiae. However, within the preserved ruins of the city, the Forum is found towards the outskirts. This is believed to be due to large scale development in the 2nd century BC, which moved the city centre away from the Forum.

Now a square of grass, the Forum area appears to have undergone many changes during the history of Pompei. Prior to the earthquake in 62 AD, the floor was receiving an upgrade – it is still partially paved with travertine. It is thought that a market was held in the middle of the open space. There are also a number of marble bases missing the statues that should sit upon them, and a half finished suggestum – the Roman equivalent of a soapbox for public speaking.
Image by Argenberg on Flickr under Creative Commons License.