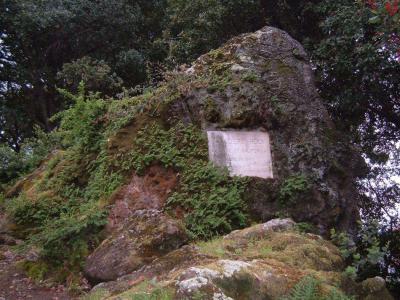 Founders' Rock is thought to be the spot where the founders of the University, originally the College of California, stood when they dedicated the property on April 16, 1860. It also thought to be the place where Frederick Billings stood when he chose the name Berkeley for the town.

Founders' Rock is a natural outcropping of rock that is thought to have been created by activity on the Hayward Fault. It was one of the most notable features in the area prior to the growth of the city. Now, its location at Hearst Avenue and Gayley Road is partially obscured by Cory Hall, which is home to the Berkeley school of Electrical Engineering and Computer Sciences.

Visitors can pinpoint Founders' Rock by looking for the plaque on the tallest point of the outcropping. The plaque was placed by the graduating class of 1896. It reads, "Founders' Rock, College of California, April 16 1860."
Image by Kirk Abbott under Creative Commons License.
Sight description based on wikipedia