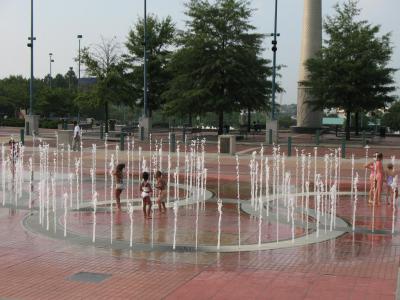 Fountain of Rings is the main highlight of the Centennial Olympic Park. It was designed in 1996 for the Centennial Summer Olympics celebration. It features computer-controlled lights and jets of water synchronized with music played from speakers in light towers surrounding the fountain. The fountain forms a splash pad that was designed for children to frolic in, as well as for concert-goers and joggers to cool off in on hot Atlanta summer days. The waterplay area consists of 251 jets that shoot 12 to 35 feet (4 to 10 m) in the air, and also creates a beautiful water sculpture that's essentially the front yard of the nearby museum. An important formal architectural landmark that is also a fun and playful space, the computer controlled fountain concept has since been replicated in other urban designs such as Dundas Square in Toronto and in commercial uses such as the Bellagio Fountains at the Bellagio Hotel & Casino in Las Vegas, Nevada.

The fountain area is surrounded by flags representing the host countries of each Summer Olympics preceding the 1996 games and eight 65-foot-tall light towers reminiscent of classical Greek marker columns. There are several pieces of sculpture scattered through the park including a statue of Pierre de Coubertin, father of the modern Olympic movement. A small amphitheater is located at the southern end of the park.

Why You Should Visit:
Fun place to rest and cool off - great to take kids to play on a hot summer day.
Image Courtesy of Flickr and James Emery.
Sight description based on Wikipedia.