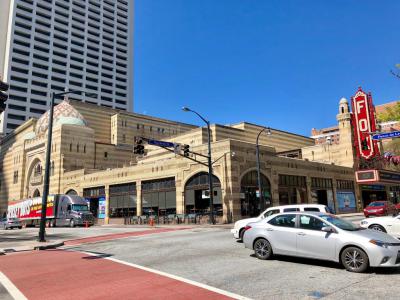 An architectural rarity in Atlanta, the Fox Theatre was originally planned as part of a large Masonic Shrine Temple – as evidenced by its Eastern/Moorish design that may bring the Arabian Nights to mind. Opened in 1920, its main features remain the same: beautiful onion-shaped domes, minarets and arches, a colossal theater organ (called Mighty Mo) that can make thousands of sounds, and of course the Egyptian Ballroom, designed to replicate Ramesses' temple.

The 4,665 seat auditorium was ultimately developed as a lavish movie theater in the Fox Theatres chain and opened with great fanfare in 1929. A brass-trimmed marble kiosk brought from Italy served as a ticket booth, while the auditorium itself, complete with crenelated walls, was an Arabian courtyard under a twinkling starlit sky that, with state-of-the-art technology, could (and still can) be transformed to a sky at sunrise or sunset.

Now considered to be the last surviving "picture palace", the venue regularly hosts a variety of cultural and artistic events including the Atlanta Ballet, film series, touring Broadway shows as well as occasional concerts by popular artists. If you have the opportunity to attend an event or performance at The Fox, go! It's an intimate venue that will not disappoint.

Why You Should Visit:
Classic, historic, and intimate theater that feels like a magical place. The stage is large, the sound is great, a giant chandelier lights the "night sky" and gilt carvings abound.

Tip:
Arrive a little early (like 30 minutes...) so you will be able to find your seat and get situated prior to the performance. You can also arrange a private tour of the theater and even rent areas of it for a private event.