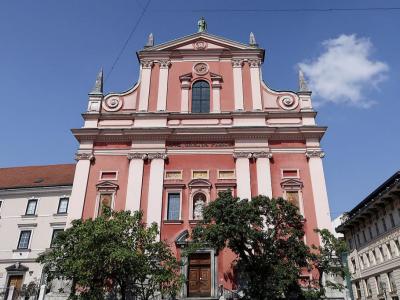 The Franciscan Church was completed in 1660 by the Augustinians and replaced an older church. The church features early-Baroque architecture. After the Franciscans took over the church, it was painted red--the Franciscan monastic order's symbolic color. Over the years, the color faded to salmon pink. The locals preferred the pink color, and the church has stayed this attractive and unique color ever since.

The original frescoes were damaged in the 1895 earthquake. Slovene painter Matej Sternen painted the new frescoes in 1936. A chapel features a cross crafted by architect Joze Plecnik.

An impressive statue of Our Lady of Loretto, or Madonna with Child, stands at the top of the front facade. The statue was crafted from beaten copper and is Ljubljana's largest Madonna statue. Three niches in the facade feature sculptures representing God the Father, an angel, and the Virgin Mary.
Image Courtesy of Wikimedia and Bex Walton.