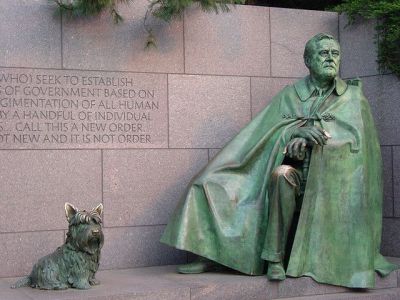 The Franklin Delano Roosevelt Memorial is dedicated to the 32nd president of the United States and to the era he represents. For the memorial's designer, landscape architect Lawrence Halprin, the site represents the capstone of a distinguished career, partly because he had fond memories of Roosevelt, and partly because of the sheer difficulty of the task.

Dedicated on May 2, 1997 by President Bill Clinton, the monument, spread over 7.5 acres, traces 12 years of the history of the United States through a sequence of four outdoor rooms, one for each of FDR's terms of office. Sculptures inspired by photographs depict the 32nd president alongside his dog Fala. Other sculptures depict scenes from the Great Depression. A bronze statue of First Lady Eleanor Roosevelt standing before the United Nations emblem honors her dedication to the UN. It is the only presidential memorial to depict a First Lady.

Why You Should Visit:
Impressively laid out memorial (going through all four of FDR's terms) that feels both monumental and serene at the same time – like a mini outdoor museum.

Tip:
Make sure to approach from the Lincoln Memorial, so you can enjoy the FDR memorial in a chronological order.
You can walk through the exhibit on your own or you can request a tour from the park rangers. They are on duty to answer questions from 9:30am to 10pm daily.
Image Courtesy of Flickr and onecle.
Sight description based on Wikipedia.