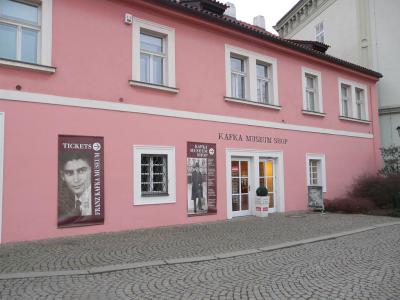 Franz Kafka, one of the key personalities of the 20th century literature, was born in Prague on 3 July 1883. His short life ended in a sanatorium in Kierling on 3 June 1924. 81 years later, in the summer of 2005, the Franz Kafka Museum opened in the remarkable Herget Brickworks building on the Lesser-Town bank of the Vltava River.

The museum's permanent exhibition consists of two sections: Existential Space and Imaginary Topography. The former offers insight into Kafka’s world by way of showing how Prague had shaped his life, left mark on his personality, guided the author’s views and ultimately transformed him. Among the exhibits are Kafka's diaries and extensive correspondence with family members, friends, lovers and publishers, bearing witness to the conflicts in Franz Kafka’s life, the influence of Prague on him and more.

The latter section is dedicated to Kafka's depiction of the city – one of the most enigmatic approaches in modern literature. With only occasional exceptions, Kafka does not name the places he describes in his novels and stories.

In addition to manuscripts, diaries and correspondence, visitors can find here each of the writer's books first editions, as well as his drawings and photographs previously not shown anywhere else in Prague. In keeping with modern technologies, the museum has 3D installations, audiovisual multimedia and music specially created set to help visitors better understand the writer's “reality.”

Guests are recommended to book a guided tour at least 7 days in advance. The tours are available in Czech, English, German, French, and Russian.