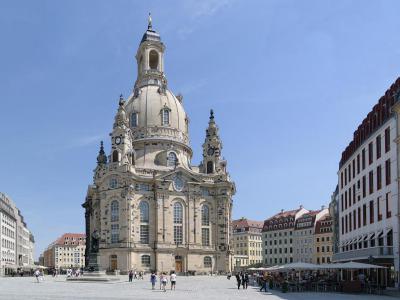 Frauenkirche (Church of Our Lady), Dresden (must see)

The current Church of Our Lady is a Lutheran church built between 1726 and 1743. It features Baroque architecture and has one of Europe's largest domes.

The first Church of Our Lady was a Catholic church built in the 11th century. It became a Protestant church during the Reformation. The original church was torn down and replaced by the new Luthern church.

In 1736, Gottfried Silbermann built an exceptional 43-stop organ for the church. Johann Sebastian Bach played a recital on the organ on December 1, 1736.

The church's iconic dome is 96 meters (315 feet) tall. The dome is known as Stone Bell ("die Steinerne Glocke" in German). The dome is often compared to Michelangelo's St. Peter's Basilica dome. Stone Bell weighed 12,000 tons and was originally held up by eight supports.

In 1945, Allied forces bombed Dresden. The church survived two days of attacks before collapsing. While most of the church was destroyed, the original altar and chancel were salvaged.

Residents salvaged and numbered stone fragments, hoping to use them in a future reconstruction. In 1994, Gunter Blobel won the Nobel Prize for medicine and donated his prize money to restore the Church of Our Lady. In addition, England's Prince Edward supported the Dresden Trust which contributed funds for the reconstruction project.

Rebuilding the Church of Our Lady cost 180 million Euros. The rebuilding effort began in 1992 and was completed in 2005. The church was rebuilt using the original plans from the 1720s and salvaged materials. About 3,800 original stones were used in the reconstruction. One can see the original stones in the building as they appear darker due to age and fire damage.

A new orb and cross were forged and placed on top of the dome. The original damaged cross stands inside by the church's altar. The original organ was replaced with a 68-stop organ.

The rebuilt Church of Our Lady is a popular attraction. US President Barack Obama visited the church in 2009.
Image Courtesy of Wikimedia and Heinz Jürgen Wolf.

If there is one thing Dresden is particularly famous for, it is the magnificent architecture. Although known primarily for its Baroque buildings, the city has several other architectural styles present too, such as Renaissance, Historicism, Modernism and Post-modernism.

Much of downtown Dresden was destroyed in February 1945 by Allied bombing, which in turn prompted the rebuilding of the...  view more

Dresden was likely settled on the banks of the River Elbe by Neolithic tribes as far back as 7,500 BC. But it also has a long and storied history as the long-time capital of Saxony. The Electors and Kings lived here for centuries, appointing the city with every cultural and artistic treasure.

Its modern form--and its name--comes from early Germanic people, who expanded East to mine the Ore...  view more

The Neustadt (New Town) of Dresden is a central district located on the north bank of the Elbe. Despite the name, this part of the city is not at all new and has been inhabited for as long as the Old Town on the opposite side of the river. Its “novelty” derives from "Neue Königliche Stadt" (New Royal Town), which is the title given to the area, formerly the district of Altendresden,...  view more