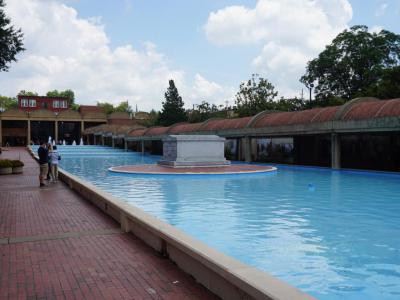 Freedom Hall at 449 Auburn Avenue is where memorabilia of Dr. King and the civil rights movement are displayed. It contains a Grand Foyer with art from Africa and Georgia, as well as a large theater/conference auditorium, bookstore and resource center. The paneling lining the staircase is from the sapeli tree, which grows in Nigeria.

Here, you can see King's Bible and clerical robe, a handwritten sermon, a photographic essay about his life and work, and, on a grim note, the suit he was wearing when a deranged woman stabbed him in New York City. Also on display is the key to his room at the Lorraine Motel in Memphis, Tenn., where he was assassinated.

In an alcove off the main exhibit area is a video about King's life and works. Additional exhibits include a room honoring Rosa Parks (whose refusal to give up her seat on a city bus led to the Montgomery bus boycott), and another honoring Mahatma Gandhi, whose emphasis on nonviolence was a major influence on King.

All of this for no charge, but there are donation boxes to make a contribution.