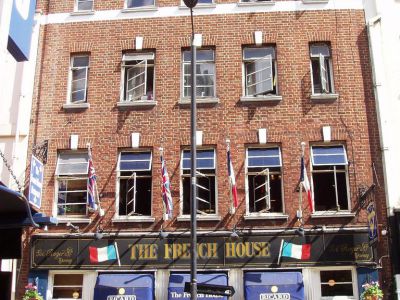 Originally opened as the Wine House back in 1910, the French House is another historic public house in London that has seen its share of famous people. It is yet another place frequented by writer and drinking enthusiast Dylan Thomas. Other notable guests to this old Soho pub include Charles de Gaulle, Francis Bacon, Malcolm Lowry, and more.

Its range of drinks includes eau de vie, a French fruit brandy that comes in pear, strawberry, and plumb, beer sold in half-pints, and an extensive wine and champagne list. The French House also maintains a strict no cell phones policy, and avoids technology in general, including televisions and music, instead focusing on conversation and interaction with the friendly bar staff.