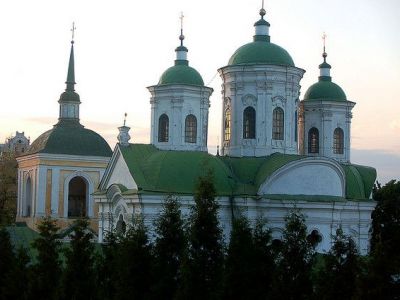 The Florovski Monastery is a religious institution and a historic monument of the 15th century. Some historians claim that it already had been in place by the time Mengli Giray, Khan of Crimea, devastated Kiev in 1482. Still, the first written document attesting to the convent’s existence is dated circa the mid 16th century, and was left by Sigismund II Augustus, the King of Poland. Initially, the monastery’s church was dedicated to martyrs Florus and Laurus. In 1711, Emperor of Russia Peter I united the Florovsky monastery with the Ascension Convent. A hundred years later, a violent fire destroyed part of the complex, leaving it in a great need of repair. The latter was done by architect Andriy Melensky. In 1824 the façade was replenished with Ionic columns, added to accentuate the classic style and attain more elegance. In the same year, the 1740 bell tower was rebuilt to include three stories. The first and the second floors were rectangular, but the third one was made round and topped by a dome-shaped roof.

The monastery is still functional and represents an interesting sight for tourists interested in religion and architecture. The tomb of nun Helen, the Icons of Mother of God of Kazan, and numerous ancient religious artefacts, along with the unique interior decoration, make the monastery a definite “must see” for those visiting Kiev.
Image by twiga_swala on Flickr under Creative Commons License.