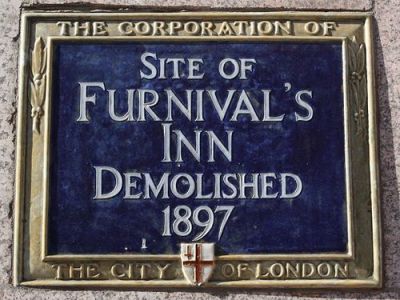 Furnival's Inn was an Inn of Chancery, which formerly stood on the site of the present Holborn Bars building, and was founded around 1383 when William de Furnival, 4th Lord Furnival leased a boarding facility to Clerks of Chancery who prepared writs for the king’s courts, assisted by apprentices who, as such, received a preliminary legal training. As a part of the Inns of Court, Furnival's Inn accommodated law students until the 19th century. After The Society of Furnival’s Inn was dissolved in 1817, the medieval building was demolished and a new block of flats, bearing the old name, was put in its place in 1818-1820.

Together with his brother Frederick, Charles Dickens resided at Furnival’s Inn from 1834 till 1837. He settled here out of necessity after having to repay his father’s debt in order to prevent him from going back to prison. Although he lived in scanty conditions, Dickens was particularly prolific during that period. Whilst lodging at the Inn, he started working on “The Pickwick Papers”, got introduced to London’s most important literary circles, and subsequently married Catherine Hogarth.

The "Martin Chuzzlewit" character John Westlock lives in Furnival’s Inn and describes it as "a shady, quiet place, echoing to the footsteps of the stragglers who have business there; and rather monotonous and gloomy on summer evenings. ... there are snug chambers in those Inns where the bachelors live, and, for the desolate fellows they pretend to be, it is quite surprising how well they get on".

Dickens's life at Furnival’s Inn is commemorated with a bust and a plaque attesting to his presence.
Image by liits on Flickr under Creative Commons License.