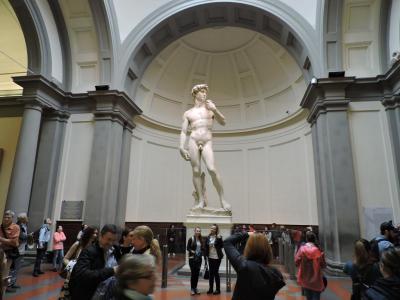 Smaller and more specialized than the Uffizi, this gallery adjoins the Accademia di Belle Arti (or Academy of Fine Arts of Florence), but despite the name has no other connection with it. It is best known as the home of Michelangelo's sculpture "David", but also has other sculptures by Michelangelo and a large collection of paintings by Florentine artists (Uccello, Ghirlandaio, Botticelli and others), mostly from the period 1300–1600, as well as plaster sculptures by Bartolini, Pampaloni and Giambologna, to name a few.

A room is dedicated to a series of gold-ground polyptychs taken from various churches in and around Florence, while the 2nd floor has a really interesting display of fabrics from the 13th-14th centuries and amazing tapestry from the same period. The musical section is also tremendous, with strings by Casini, Amati and Stradivari, harpsichords and some rarer items. Every piece has a written explanation and a few have a number where you may punch for information on audio phones.

***MICHELANGELO'S MASTERPIECES***
The real show here is the original David, which is utterly staggering. Leading up to it are a series of other incomplete sculptures by the artist that are beautiful in their own right, and speak volumes about the technical, conceptual and emotional approach to his work (look for the mallet and chisel grooves on the stone). Among these are four Prisoners, intended for the tomb of Pope Julius II, and a statue of Saint Matthew, joined by a Pietà discovered in the Barberini chapel in Palestrina. David itself has often been reproduced, in plaster and imitation marble fiberglass, signifying an attempt to lend an atmosphere of culture even in some unlikely settings such as beach resorts, gambling casinos and model railroads.

Tip:
A good time to go during high season is on Tuesdays and Thursdays when the Galleria is open late (until 10pm) and lines are relatively short. Consider pre-booking otherwise. You'll have to take your online booking to a doorway just opposite and a little down the street to turn the booking into your tickets (ask the guards to direct you).