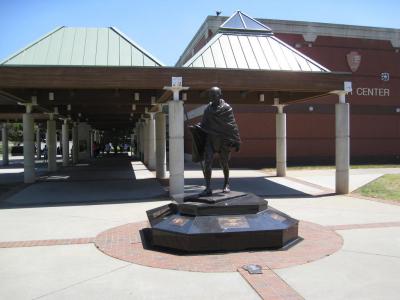 Prominently displayed on the grounds of the MLK National Historic Site is a statue dedicated to political ethicist, Mahatma Gandhi (1869-1948), whose beliefs in nonviolent resistance strongly influenced Dr. King. The only statue on the grounds, it was donated by the Indian Council for Cultural Relations in collaboration with The National Federation of Indian American Associations and The Embassy of India, USA. The inscribed bronze plaque reads:

"Nonviolence, to be a potent force, must begin with the mind. Nonviolence of the mere body without the cooperation of the mind is nonviolence of the weak of the cowardly, and has, therefore, no potency. It is a degrading performance. If we bear malice and hatred in our bosoms and pretend not to retaliate, it must recoil upon us and lead to our destruction."
— Gandhi

"Tribute to the Mahatma Gandhi was inevitable. If humanity is to progress, Gandhi is inescapable. He lived, thought and acted, inspired by the vision of humanity evolving toward a world of peace and harmony. We may ignore him at our own risk."
— Martin Luther King Jr.
Image by Chris Yunker on Flickr under Creative Commons License.