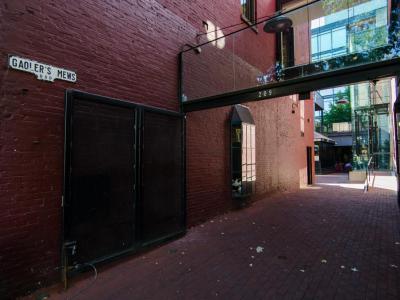 Gastown's Gaoler's Mews is where Vancouver's first jail used to be. Over the years, this spot has seen the great Vancouver fire of 1886, a pub, and over 40 public executions by hanging. Though it has the same old time appeal as the rest of Gastown, Gaoler's Mews is probably more famous for its unseen inhabitants.

Stories abound of the hauntings that supposedly take place in Gaoler's Mews. One of the contractors, working on the Irish Heather pub, discovered that his tools would regularly be moved, and one of the owners heard a woman calling her name when nobody else was there. Visitors have also seen a mysterious woman dressed in black, moving along the area near where Vancouver's scaffold used to be. Another spirit, a man in black, was seen multiple times by the Irish Heathers' staff, as well as the staff of the coffee house next door. When the building was renovated, the figure could be seen moving through a wall where a door used to be.

Though neither the Irish Heather nor Blake's Coffee Parlour are still in Gaoler's Mews, this building is still a popular destination for tourists. People from all over come with infra-red cameras, Geiger counters and other paraphernalia to, hopefully, record some evidence of the area's famous hauntings.
Image Courtesy of Flickr and Jeff Hitchcock.