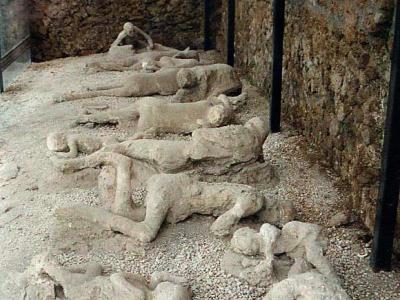 The many historical wonders of Pompei tell us much about how people lived in this ancient city. One quiet corner amongst its maze of buildings gives a poignant insight into the disaster that destroyed this city overnight. The eruption of Mount Vesuvius in 79 AD is believed to have been one of the most catastrophic volcanic events of all time. It threw a deadly cloud of ash and stone up to 20 miles into the air, and ultimately released enough thermal energy to make a hundred thousand atomic bombs. Those unable to flee Pompei, just a few miles from the volcano, were killed by lava flows that swept through the city. When the ash cloud fell to earth, it buried Pompei, and an estimated 16,000 victims of the deadly eruption.

When they began excavating Pompei in the 19th century, archaeologists began finding decomposed bodies of people and animals. By pouring plaster into air pockets left in the rubble, they were able to create casts of many victims. At the Garden of the Fugitives, an area thought to have been a small orchard, thirteen bodies were found, and their casts have been laid out as they were discovered. It is a poignant memorial to those that perished in the eruption that preserved the city for modern visitors. A woman can be seen holding her child, whilst others were clearly trying to protect themselves, in vain, from the deadly lava flow.
Image by Walter Smith on Wikimedia under Creative Commons License.