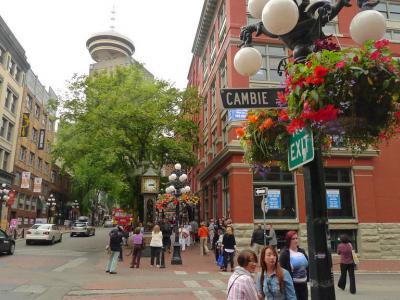 Gastown is Vancouver's historic area. It was named after a steamboat captain named “Gassy” Jack Deighton, who opened Vancouver's first saloon in 1867. Over the years, the area became a prosperous area for commerce. Gastown was threatened by attempts to build a freeway through the area in the 1960s, but Vancouver's citizens rallied to preserve its historic architecture and character. Today, the cobblestone streets and preserved Victorian buildings continue to give Gastown a unique appeal.

One of Gastown's favorite attractions is the Steam Clock. Though it isn't the area's oldest sightseeing spot, the Steam Clock is still a distinctive Gastown feature. The clock was built over a steam grate as a way to harness the power provided by the steam, and prevent transients from sleeping on the grate in cold weather. A small steam engine inside of the clock powers the pendulum mechanism, which allows the clock to keep time without winding.

In addition to historic sites, Gastown is home to plenty of chic boutiques, clubs, bars, art galleries, music studios, and tourist spots. Fabric, formerly called The Town Pump, has been an important venue for Vancouver's music scene since the 1960s. Though Gastown is a pretty old area of Vancouver, it continues to shape the face of Vancouver's culture.

Why You Should Visit:
Lovely characterful traditional Canadian / North American area which is indeed a delight to stroll through – just follow the crowd, as there's real life & history all around.

Tip:
Most of the shops are closed by 9pm, and that's considered being open "late".
Image by Michael Rogers on Wikimedia under Creative Commons License.
Sight description based on wikipedia

The nightlife in Vancouver is diverse enough for everyone to find a suitable spot to relax and let loose. The gay and lesbian community certainly has a great selection of clubs and bars to choose from, all with great music and great drinks. Take the following tour to experience Vancouver's top rated gay clubs.