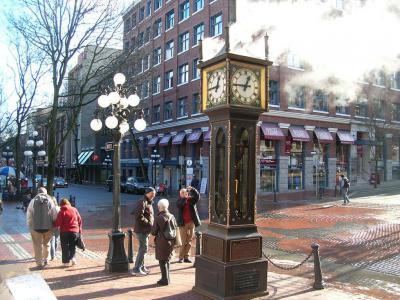 Of all Gastown's attractions, none is as well known as the Steam Clock. Though the clock certainly isn't the oldest attraction in Gastown, and steam clocks, as such, can be found elsewhere, Gastown's steam clock is one of the few remaining steam-powered clocks that is still functional.

The clock was originally built over a steam grate, partly to hide the unsightly grate, partly to harness the power of the otherwise wasted steam, and partly to prevent transients from using it for warmth in cold weather. The steam itself is generated by Vancouver's distributed steam heating system.

The original mechanism that powered the clock failed after a period of time, and electricity was required to keep the landmark operational. Fortunately, with donations from Gastown businesses, the steam mechanism was repaired and replaced, and continues to work to this day. As steam rises from the grate, it powers a small steam engine that brings a chain lift into motion, which, in turn, moves steel balls upward until they roll onto a descending chain lift. The weight of the balls is what actually powers the clock's pendulum, allowing it to keep time without winding. Since the clock uses whistles to mark the time, the steam also powers the clock's chiming mechanism.

Why You Should Visit:
When it strikes (on the quarter, but especially the full-hour, and more so at mid-day) it really does put on something of a show.
Lots of neat shops in the area to browse through, while waiting, or you could sit across the street and enjoy it with a meal.

Tip:
Set your camera to video to catch the impressive display.
Difficult to photograph, but patience will be rewarded.
Image Courtesy of Wikimedia and Canuck85.
Sight description based on Wikipedia.