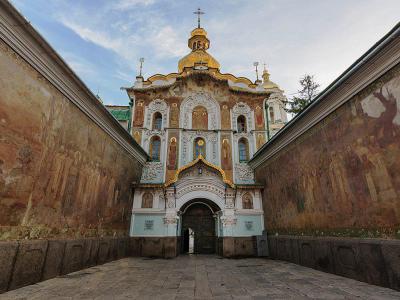 Gate Church of the Trinity, Kiev

The Holy Trinity Church is located beside the Pechersk Lavra Gate. Apart from being an active place of worship, the church is acknowledged as an architectural and historic monument whose distinct design and beautifully painted walls largely add to its artistic value. The church was built in the 11th century, between 1106 and 1108. Initially, it was meant as a fortification structure, overseeing the Pechersk Lavra Gate. To ease access inside, at some point, a narthex was built along one of the walls. A remarkable piece of Kievan Rus architecture, the church was rather austere in appearance, well hidden behind the monastery walls.

In the 17th and 18th centuries the building endured thorough reconstruction, with its outer style changed to classical Ukrainian Baroque. The front walls were painted in oil and frescoes were added for decorative, as well as religious, purposes. In line with the frescoes, the iconostasis was also replaced with a new one, carved in lemon tree and gilded. Also at that time an impressive chandelier, with sixteen arms, was installed.

A monument of its time, the Holy Trinity Church is one of the most beautiful and authentic religious sights in Kiev.
Image Courtesy of Wikimedia and Misha Reme.