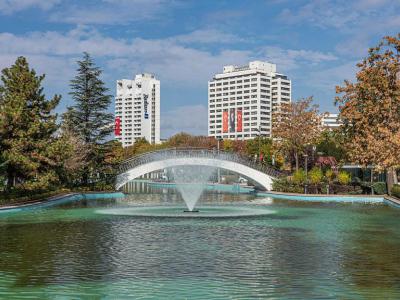 Gençlik Parkı is a public park in Ankara. The 68 acres park is almost at the center of Ankara.

Its altitude is about 2,790 feet, which makes it one of the lowest points of Ankara. It is surounded by Ulus Square in the north, Opera house in the east, Selim Sırrı Tarcan Sports Hall and Ankara Central Station in the south and, 19 Mayıs Stadium in the west. During the early years of the republic, the place, where now the park is, was a marshland. After the marshes were dried up, the park was established and opened to public on 19 May 1943, the National Youth Day. There were coffee houses around the main pool, a swimming pool, a luna park, an open air theatre and tracks. In 1957, two miniature trains were established within the park area as a part of ammusement.

After restoration and renovation works, there are now a cultural center, youths' center and Ankara Municipality Convention Hall as well as 43 kiosks in the park. During nights light performances are held in the main pool, also a science museum is under construction.
Image Courtesy of Wikimedia and Ankaralı Turgut.
Sight description based on Wikipedia.