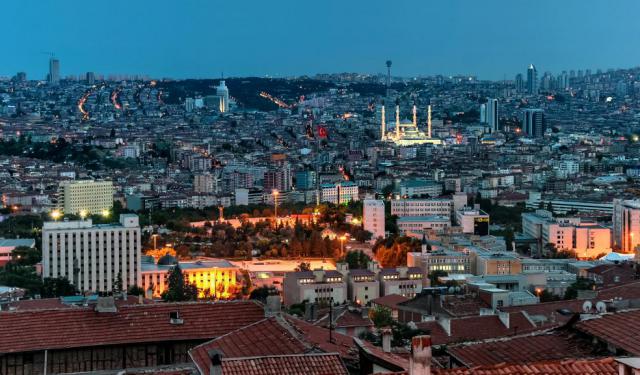 The capital of modern Turkey, Ankara is an ancient city dating back to circa 2,000 BC. The country's cosmopolitan capital, it is also a major economic and cultural hub, replete with cultural and historic attractions. The Ankara castle, Column of Julian, Temple of Augustus and Rome, and Gençlik Park are just some of them. Follow this orientation walk to explore these and other key attractions of Ankara.
Image Courtesy of Flickr and Jorge Franganillo.
How it works: Download the app "GPSmyCity: Walks in 1K+ Cities" from iTunes App Store or Google Play to your mobile phone or tablet. The app turns your mobile device into a personal tour guide and its built-in GPS navigation functions guide you from one tour stop to next. The app works offline, so no data plan is needed when traveling abroad.

Hacı Bayram Mosque is one of the oldest mosques in Ankara, situated in the historical Ulus. It was built in the 15th century. The edifice was inaugurated in honor of Hacı Bayram Veli two years before he died. He was later buried nearby. The total area of the mosque is about 700 meters divided into two levels.
Image Courtesy of Wikimedia and Ahmetan.
2

2) Temple of Augustus and Rome (must see)

The Temple of Augustus and Rome dates back to 20 BC and was built in the period of expansion of the Roman Empire and the establishment of the Roman province of Galatia with Ancyra (ancient name of Ankara) as its capital. The Temple has many inscriptions in Latin, such as the text of Res Gestae Divi Augusti and some Greek inscriptions on the exterior. Located now in the oldest part of the city, Ulus, it was rebuilt by the Romans in the 2nd century and represented at first an ancient Acropolis. It was later rebuilt by the Byzantines as a church.
Image Courtesy of Wikimedia and AtilimGunesBaydin.
3

3) Column of Julian (must see)

The Column of Julian was erected in honor of Roman emperor Julian in 362 AD to commemorate his visit to Ankara. Local inhabitants call the column Belkıs Minaresi, which means "Queen of Sheba Column". Unfortunately, nobody knows the reason for calling it so.
Image Courtesy of Wikimedia and Stephan Garcia.
4

One of the most important buildings of the city is Ankara Palace. Founded in 1927 it functioned as a “Parliamentary Club” and was the place where decisions having an important influence on the life of the country were taken. The building is also an architectural attraction. It is rectangular in shape and has beautifully designed accessories both inside and outside.
Image Courtesy of Flickr and Amir Farshad Ebrahimi.
5

Gençlik Parkı is a public park in Ankara. The 68 acres park is almost at the center of Ankara.

Its altitude is about 2,790 feet, which makes it one of the lowest points of Ankara. It is surounded by Ulus Square in the north, Opera house in the east, Selim Sırrı Tarcan Sports Hall and Ankara Central Station in the south and, 19 Mayıs Stadium in the west. During the early years of the republic, the place, where now the park is, was a marshland. After the marshes were dried up, the park was established and opened to public on 19 May 1943, the National Youth Day. There were coffee houses around the main pool, a swimming pool, a luna park, an open air theatre and tracks. In 1957, two miniature trains were established within the park area as a part of ammusement.

After restoration and renovation works, there are now a cultural center, youths' center and Ankara Municipality Convention Hall as well as 43 kiosks in the park. During nights light performances are held in the main pool, also a science museum is under construction.

Image Courtesy of Wikimedia and Ankaralı Turgut.
Sight description based on Wikipedia.
6

One of the main shopping streets in Ankara and most beloved of tourists is Çıkrıkçılar Yokuşu. The area is full of old traditional Turkish shops, selling traditional products like the famous hand-woven carpets, leather accessories and lots of other goods of local origin at the best price possible.
Image Courtesy of Wikimedia and Vikiçizer.
7

7) The Museum of Anatolian Civilizations (must see)

The Museum of Anatolian Civilizations is located on the south side of Ankara Castle. It consists of the old Ottoman Mahmut Paşa bazaar storage building, and the Kurşunlu Han.

After the remodelling and repairs were completed (1938–1968), the building was opened to the public as the Ankara Archaeological Museum. It is one of the richest museums in the world. Within this Ottoman building, the museum has a number of exhibits of Anatolian archeology. They start with the Paleolithic era, and continue chronologically through the Neolithic, Early Bronze, Assyrian trading colonies, Hittite, Phrygian, Urartian, Greek, Hellenistic, Roman, Byzantine, Seljuq and Ottoman periods. There is also an extensive collection of artifacts. The exhibits of gold, silver, glass, marble and bronze works date back as far as the second half of the first millennium BC. The coin collections, with examples ranging from the first minted money to modern times, represent the museum's rare cultural treasures. Museum of Anatolian Civilizations reaching the present time with its historical buildings and its deeply rooted history was elected as the first "European Museum of the Year" in Switzerland on April 19, 1997.

Image Courtesy of Wikimedia and Georges Jansoone.
Sight description based on Wikipedia.
8

Ankara Castle is another Turkish historic spot, founded initially by Galatians on the top of a hill in Ulus. The lands around and inside the citadel are the oldest parts of the city and thus are a living example of architecture of different ages and nations. The region has changed a lot since antiquity. It has many cafés and restaurants serving traditional cuisine.
Image Courtesy of Wikimedia and Mark Hamilton.
9

One of the most famous architects in Ankara in the 16th century was Sinan who designed the Yeni Mosque. The construction has an amazing design on the inside, with a white marble covering the pulpit and the prayer place whilst the outside is made of traditional Ankara stone. The edifice represents the largest Ottoman mosque in the city.
Image Courtesy of Wikimedia and Donnyhoca.