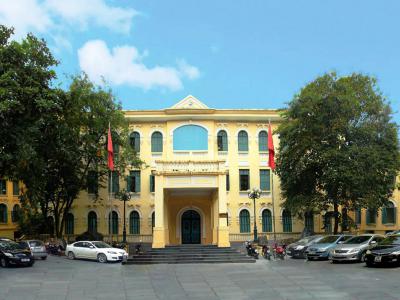 The Geological Museum located near the National Museum of Vietnamese History in Hanoi, is a unique storehouse of information regarding the rocks, fossils and gemstones found in Vietnam. Collections are arranged in sections that provide detailed information about the geological evolution and mineral wealth of the country.

In 1898, the Geological Survey of Indochina was established by the French colonial rulers. Two geologists, H. Lantenois and H. Mansuy, were given the task of building a museum to house many of the objects found during the survey. A stately French style structure was built in 1914 where the wealth of objects, rocks fossils and gemstones from around the country were stored. When the museum opened its doors, it had only one storey. Two more floors were added in 1915 to effectively showcase all the specimens collected during and after the first geological survey.

Today, the museum belongs to the Department of Geology and Minerals of Vietnam. Exhibits are arranged in three major sections and 12 subsections. The section showing the evolution of geology shows how many of the scenic natural wonders of Vietnam were created. There are also many geological publications that will interest visitors and students at the museum. Visitors can purchase rubies, the most commonly occurring gemstone in Vietnam at a nearby store.