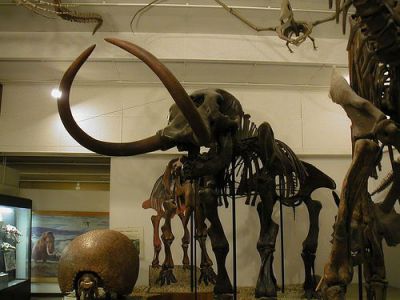 The Geology Museum has its beginnings in the original building of the Science Hall, where the first meeting of the Board of Regents took place. The board's meeting aimed to create a place to exhibit geological and mineralogical items. After the fire of 1884 that devastated a great part of the collections, the plans to build a fireproof building were drawn up. As a result, the Geology Museum opened its doors again within the Science Hall in 1886.

Worthy of special attention, and the museum's major attraction, is the Boaz mastodon. The mastodon's bones were discovered by Dosch children after a storm in 1897. More than half of the skeleton was found. G. M. Schwartz and M. G. Mehl reconstructed it afterward. Today, the skeleton stands at 9.5 feet tall, 15 feet long.
Image by Forsavious under Creative Commons License.